Redlining is affecting Northeast Ohio’s children’s ability to breathe. Here’s what we can


In February 2022, 7-year-old Cayden Dillon was playing with other kids in his kindergarten class.

“His gym teacher had started to notice that he was having trouble breathing,” said his mother Tracy Dillion. “They ended up calling 911 because they just didn’t know what was happening or if it was something bad.”

Cayden was rushed to the emergency department by ambulance.

“They gave him some kind of steroid to keep his airway [open] so it wasn’t so hard for him to breathe,” said Dillon, who called the ordeal “very scary.”

When he arrived at the hospital, Cayden was officially diagnosed with asthma.

Dillion and her children live in Slavic Village on Cleveland’s southeast side, in the same five-bedroom home where she was raised in the 1990s. 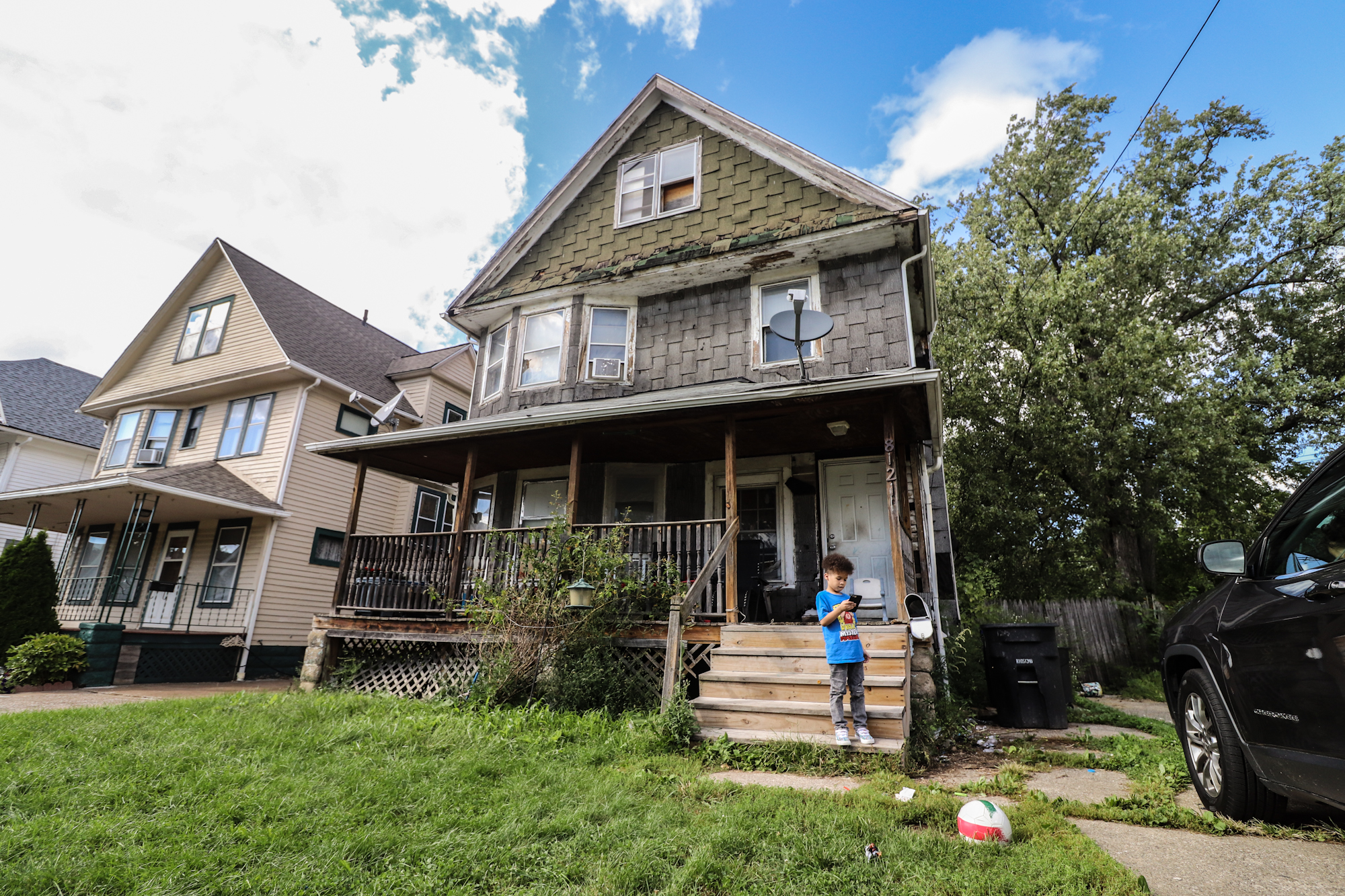 Cayden’s mother, Tracy Dillon, said she is in the process of getting the family’s home tested for mold and other allergens, but had trouble accessing home inspections free of charge.

The home has been in Dillion’s family for nearly 50 years, and she has lived there her entire life. Now, she’s raising her own kids — Tavion, 10, Cayden, 7, and Neveah, 6 — in the same house.

The Dillons are very familiar with asthma: All three children have it. They’re not the only ones in the neighborhood struggling to breathe.

Children living in Slavic Village face some of the highest childhood asthma rates in the nation — regardless of race or ethnicity. But there are other Northeast Ohio neighborhoods where the asthma rates for kids are nearly as grim.

Brenda Lee Elkins-Wylie grew up in Cleveland’s Hough neighborhood. In the 1960s, she often watched kids play outside the one-bedroom apartment where she lived with her mother. Her asthma symptoms were so severe that she was often stuck indoors, she said. 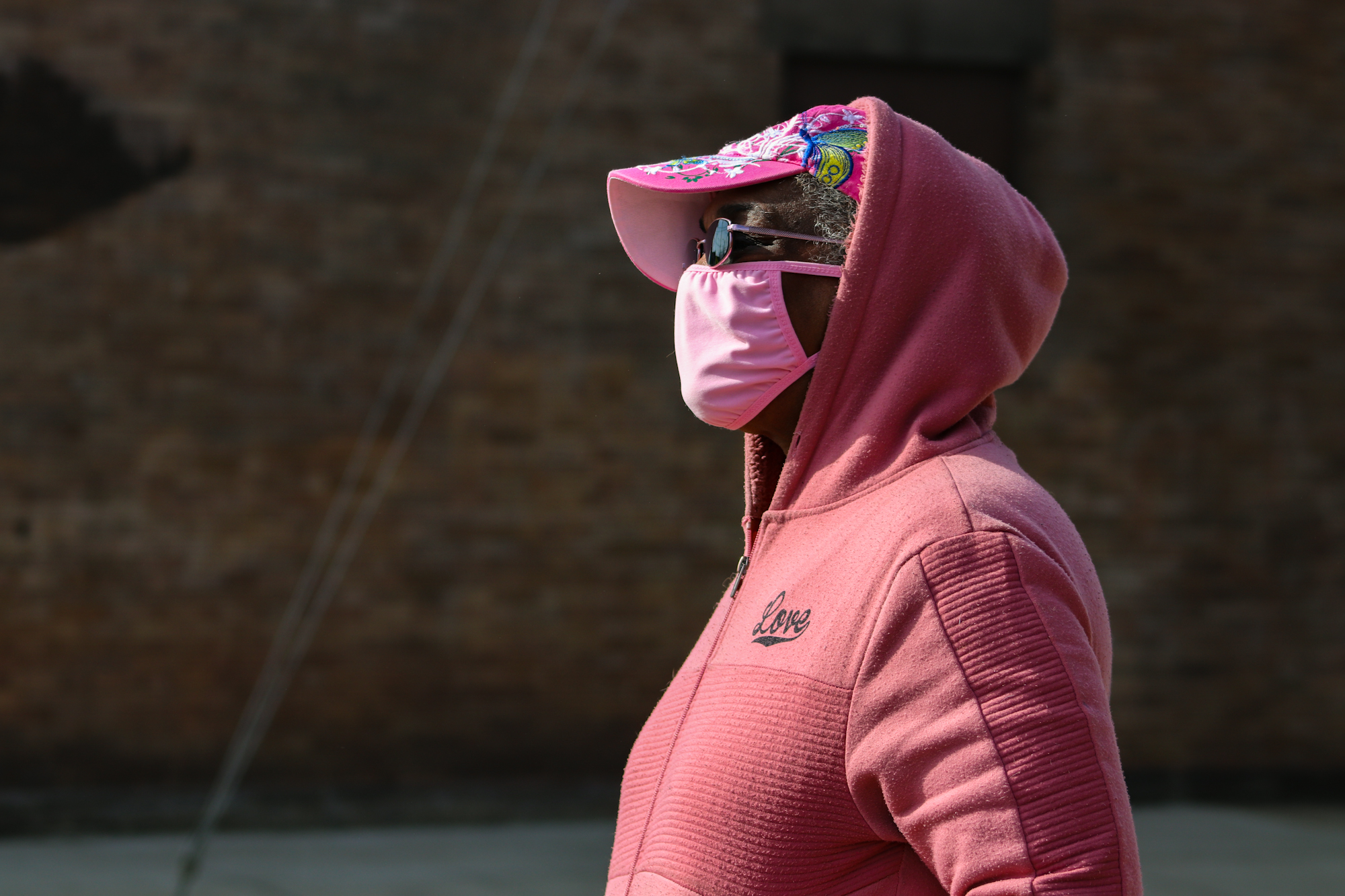 Brenda Lee Elkins-Wylie stands on the sidewalk near the home she rents in Cleveland’s Slavic Village neighborhood with her cat and two dogs.

“One year, I missed two months of school,” she said. “It was really hard at times.”

About 30 miles south, Tee Tee Bonnie, who grew up in Akron’s North Hill neighborhood, sometimes wakes up in the middle of the night wheezing and reaching for her inhaler.

Before moving to Akron’s Summit Lake neighborhood, Bonnie, who is now in her 30s, lived with her mother in a century-old house in North Hill, where dust, cigarette smoke and lack of ventilation triggered “terrifying” asthma symptoms.

“I started getting chest pains and real shortness of breath,” Bonnie said, describing one particularly frightening asthma attack she had during middle school. “It was hard to breathe, and I started wheezing.”

People who live in Hough and Slavic Village in Cleveland and North Hill in Akron are more likely to suffer from asthma than the national average — which is about 8% among adults, according to data from the University of Richmond and the Centers for Disease Control and Prevention.

But higher asthma rates are not all the neighborhoods have in common. Parts of each were likely redlined more than a century ago, Home Owners Loan Corporation (HOLC) maps show. 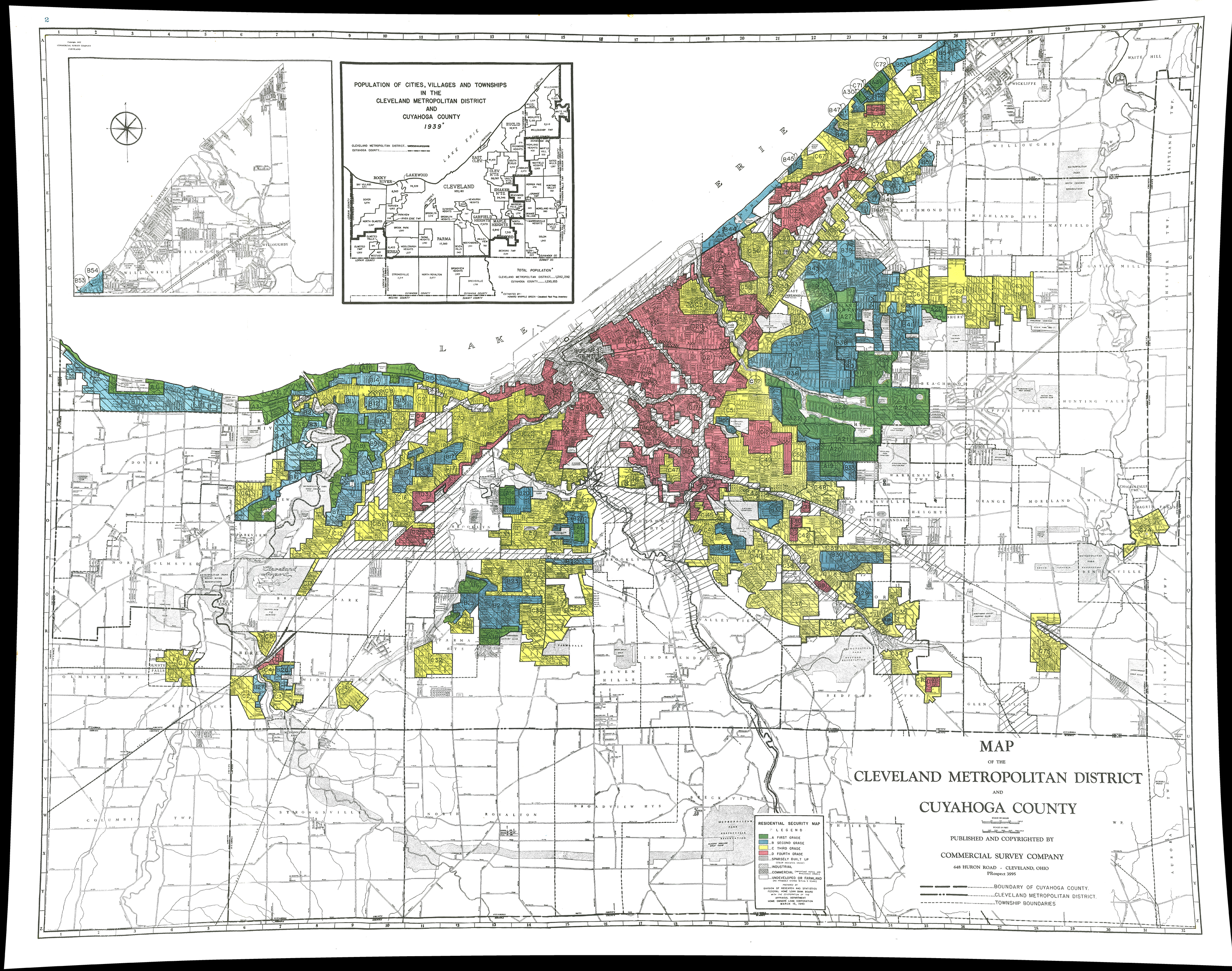 In the 1930s, a federal agency called the Home Owners’ Loan Corporation created color coded maps of neighborhoods in nearly 250 cities across the country. These maps reflect the thinking behind housing policies that denied credit and encouraged disinvestment in Black, immigrant and poor neighborhoods now known as ‘redlining.’ HOLC rated neighborhoods from A, green, ‘best’ to D, red, ‘hazardous.’ This map shows the grades given to Cleveland neighborhoods.

Instituted in the 1930s, redlining is a discriminatory lending practice used to refuse home loans or insurance in any neighborhood deemed to be a high financial risk. Because neighborhoods, where Black people and other people of color lived, were devalued, the practice often resulted in a lack of resources for predominantly Black and immigrant neighborhoods.

Ultimately, HOLC’s maps were not used to deny people mortgages based on race — but they informed real estate practices at the Federal Housing Authority and private banks and mortgage lenders that did, historians say.

At least two studies, one in California and another in Pittsburgh, have suggested there is a connection between living in a neighborhood that was subject to redlining in the past and an increased likelihood of suffering from asthma today.

In terms of asthma, the situation is particularly acute in Slavic Village, according to data collected by the Better Health Partnership, a regional health collaborative. 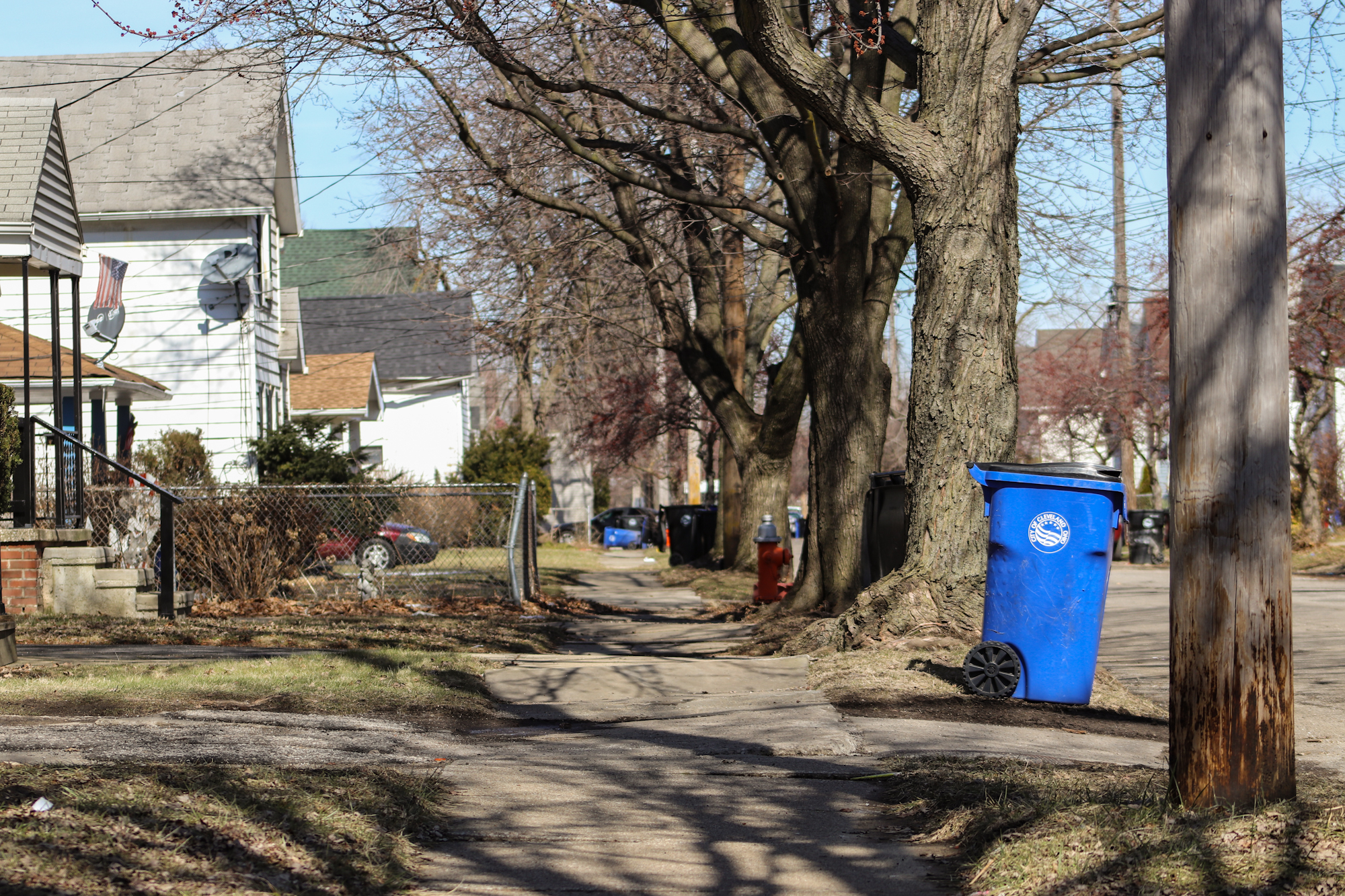 This block of older homes is located in Cleveland’s Slavic Village neighborhood, where Tracy Dillion and her three young children all live with asthma symptoms.

“We directly link racist loaning practices more than 80 years ago to the maintenance of poor environmental quality in the most redlined neighborhoods today,” said lead author Alexander Schuyler, an M.D. and Ph.D. student in Pitt’s Medical Scientist Training Program. “Our data, in turn, connects the higher pollution exposures to worsened asthma outcomes. In short, institutional racism — not race-based biology — is why many Black Pittsburghers experience severe asthma.”

Elkins-Wylie, who grew up in Hough, now lives in a single-family home with her cat and two dogs in Slavic Village. Dr. David Margolius, director of Cleveland Public Health, used to work at a MetroHealth Clinic on Broadway Avenue in Slavic Village, not far from where Elkins-Wylie lives now.

“I think any visitor to Slavic Village and Broadway would be struck by the amount of industrial and commercial traffic that is all around you,” said Dr. David Margolius, director of Cleveland Public Health, who used to work at a MetroHealth Clinic on Broadway Avenue in Slavic Village, not far from where Elkins-Wylie lives now.

Margolius pointed to recent studies that suggest a link between living near freeways and both increased incidents of asthma and reduced lung function. 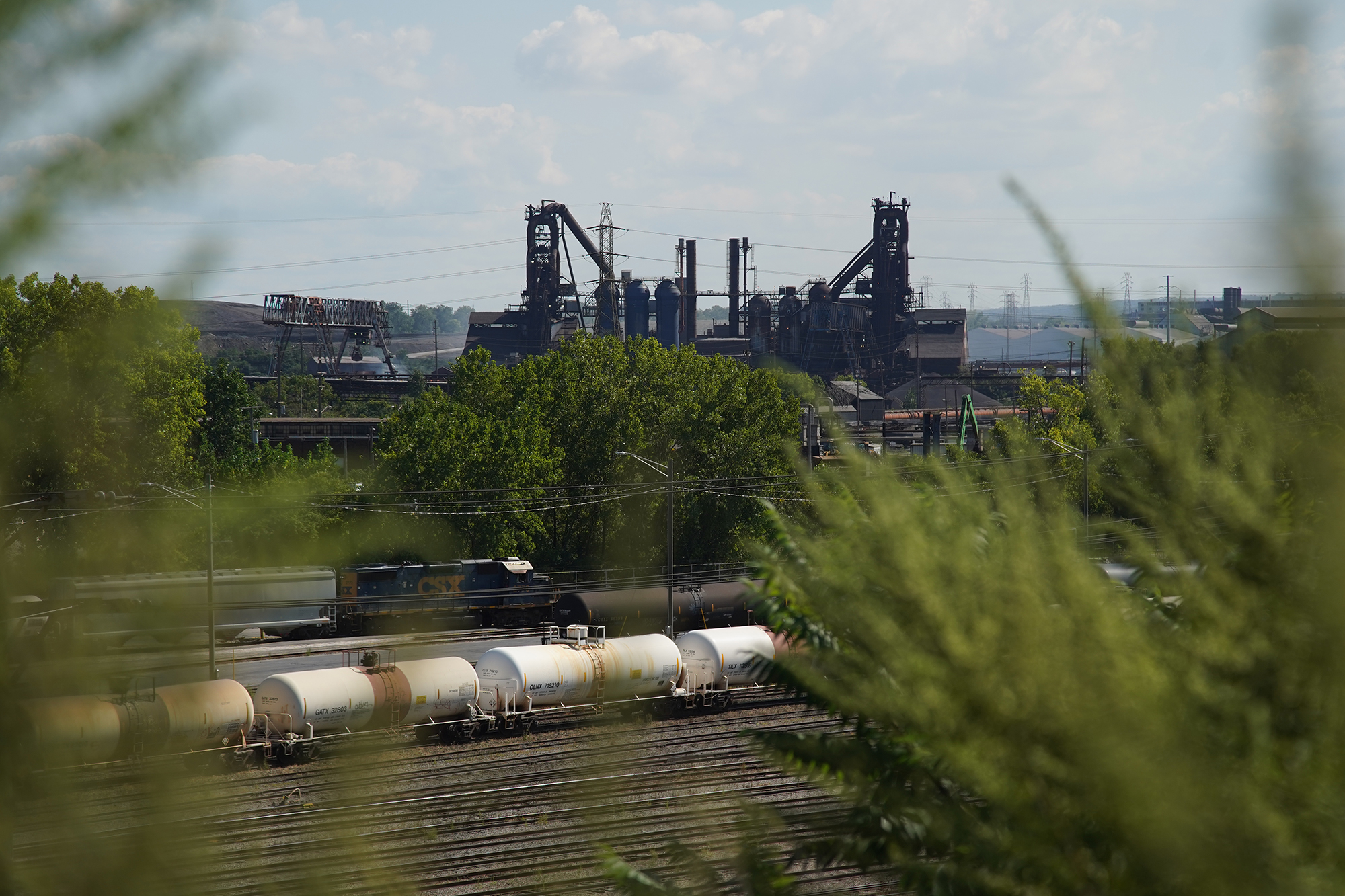 Cleveland’s industrial valley lines the banks of the Cuyahoga River between Cleveland’s Tremont and Slavic Village neighborhoods. As far back as the 1930s, air pollution created by industry close to the neighborhood was noticeable.

For Black children, the outlook is even worse, often triggering other negative health outcomes as they grow, Margolius said.

Families in historically redlined and impoverished neighborhoods are facing a “perfect storm” when it comes to environmental factors harming their health, she said.

In the late 1970s, Elkins-Wylie moved from Hough to Lakeview Terrace, a neighborhood that was also redlined, HOLC maps show.

Positioned between the reinforced bank of the Cuyahoga River and the West Shoreway freeway, Lakeview Terrace was one of the first federally-funded public housing complexes in the nation.

Surrounded by industry, poor air quality has been an issue for Lakeview residents for decades. Today, the neighborhood’s asthma rate is nearly 12%, University of Richmond data show. 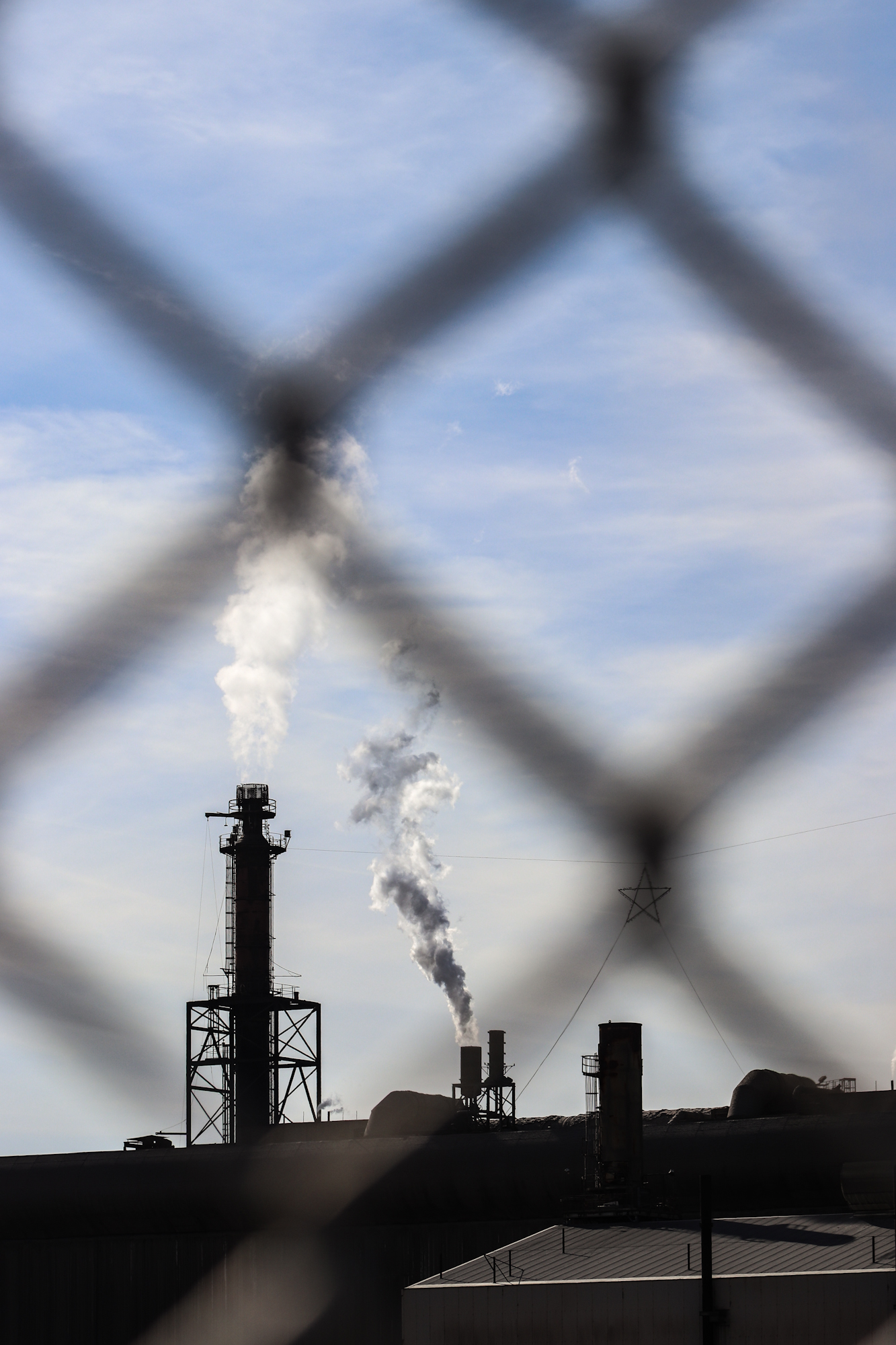 Smoke discharges from a large vent in Cleveland’s Industrial Valley, where heavy industrial pollution has historically affected residents in the adjacent Slavic Village.

Elkins-Wylie’s struggles with asthma are not unique in Cleveland. Cleveland ranks first among the five major cities that make up the Ohio Valley Asthma Belt — with higher asthma rates than Columbus, Dayton and Detroit, according to the Asthma and Allergy Foundation of America’s 2021 Asthma Capitals report.

Nationally, Cleveland ranks sixth in the nation on the Asthma and Allergy Foundation’s list of “asthma capitals,” where living with and managing asthma symptoms is most difficult and expensive.

The environmental factors people experience growing up affect the likelihood that they will develop asthma, explained Ross.

“All of those things, whether it’s toxins from air pollution or toxins from stress, that exposure impacts the way the genes are expressed at the genetic level,” she said. “Not just the DNA you’re born with, but how it gets turned on.”

How did we get here?

Read More: Redlining is affecting Northeast Ohio’s children’s ability to breathe. Here’s what we can

Where are the ‘most endangered’ sites in Columbus, Ohio?

Restored Tudor Revival in Cleveland Heights available for under $2.2M: House of the…

Ohio abortion bill could criminalize IVF, doctor says: The Wake Up for Friday, May…

Applicants can now apply to be a real estate agent online…

The Newark Daily Times
Prev Next 1 of 684