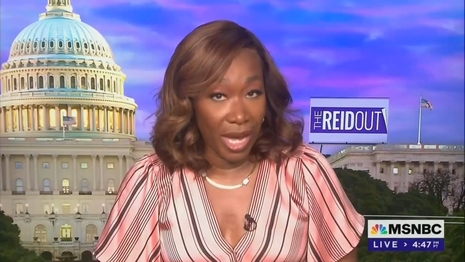 MSNBC host Joy Reid was trending on Twitter after she fulminated on Friday over the presence of black boys holding anti-CRT signs at a bill signing of the “Stop Woke Act” by Florida Gov. Ron DeSantis. She called it “extra sick” and “tantamount to child abuse.“

Reid, who worked for the Obama campaign in Florida, has a seething red-hot hatred for “Bull Connor” DeSantis.

Virginia Kruta at the Daily Wire reported a tweet from Florida state Sen. Shevrin Jones (D) was what apparently set Reid off — “The fact that @GovRonDeSantis had these Black young men, who are not clear on this message, holding up a sign about something they know nothing about is the real indoctrination,” he said.

Jones gave no evidence the children were ignorant little stooges.

This mis-use of Black boys is tantamount to child abuse. I would really like to hear the back-story on who these kids were and how they wound up at a DeSantis event. Given how anti-Black DeSantis is, using Black children this way is extra sick. https://t.co/FUyS5GDNMw

“That sure looks like T. Willard Fair in the background. But I’ve been told by a trusted source that these were not Miami Urban League kids, standing there looking like they were at the dentist. Any Florida journalists have insight into this?” Reid continued.

DeSantis press secretary Christina Pushaw tweeted “I was working at this event and helped with the set up. My colleague talked to all the kids beforehand & told them what the issue was & what bills @GovRonDeSantis was signing. Hundreds of people attended this event; those ~50 who ended up on stage freely chose to stand on stage.”

Reid later touted an anonymous source that the children “may not have known in advance why they were there” — to help a “racist.”

Update: heard from a Florida source today that these Black boys who America’s most racist governor used as props came from a Miami charter school (I won’t name the school to spare them from MAGA harassment/threats) & that they may not have known in advance why they were there. https://t.co/9aOCOkLOpM

David X. Henry responded to Reid on Twitter with a picture of 11-year-old black boy Marcelas Owens at the bill signing of Obamacare. Journalists like Ali Velshi (then at CNN) gushed all over him: “Marcelas Owens is fighting back the way we’re supposed to — with class, persistence, and style well beyond his years. We can all take a lesson from this 11-year-old.”

Joy Reid and the Left adored children when they were at the center of gun-control efforts — the Parkland lefties and the child activists who spoke at “The March for Our Lives” four years ago (including 11-year-old Naomi Wadler).  Joy Reid anchored the event live in DC for MSNBC. Since the cause was liberal, it was “The teenagers are teaching the adults!”

OZ Investing In Ohio And Kentucky, With Nest Opportunity Fund

Fireball! Scientists advise meteorites may be scattered across southern Ontario