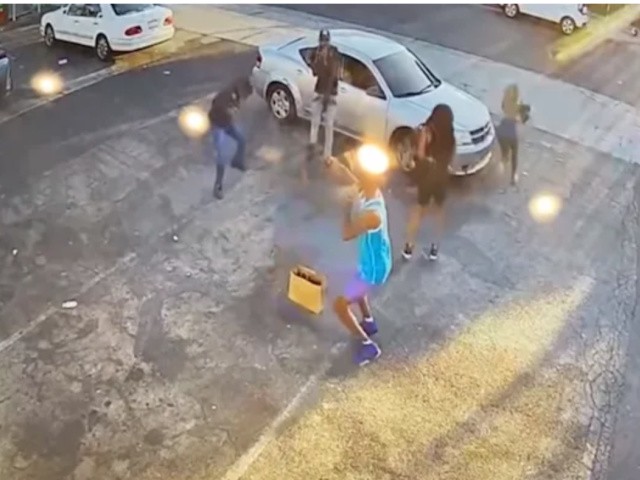 Yahoo reports that a man was talking with two women in a parking lot when a Dodge Avenger pulled up and two would-be robbers exited the vehicle.

The two suspects approached the man and two women and the man responded by pulling a handgun and shooting, wounding both alleged would-be robbers:

The Los Angeles Police Department’s Wilshire Division notes that the wounded suspects fled but were quickly captured by police. They were identified as 22-year-old Nicholas Brown and 28-year-old Markell Hayes.

The driver of the Dodge Avenger fled the scene in his vehicle, eluding capture. He is simply described as a black male.

AWR Hawkins is an award-winning Second Amendment columnist for Breitbart News and the writer/curator of Down Range with AWR Hawkins, a weekly newsletter focused on all things Second Amendment. He is the political analyst for Armed American Radio. Follow him on Instagram: @awr_hawkins. Sign up to get Down Range at breitbart.com/downrange.

Check Out the Crowd at Joe Biden’s CNN Town Hall

Unless We Pass Voting Laws, ‘We Are Going to Lose Our Democracy’ When TX…

‘Courageous’ to Sell ‘Art’ to ‘Anonymous’…

Staffer Note to Joe Biden — ‘There’s Something on Your Chin’

Buckeyes remains focused on The Game amid national title chase

What do doctors say about children wearing masks at school?

Man Who Hid in Teen Girl’s Bedroom for Weeks Sentenced…

The Newark Daily Times
Prev Next 1 of 332