HAMILTON, Ohio — After two brushes with death, a southwestern Ohio man is enjoying each and every moment of his life moving forward.

What You Need To Know

Brandon Sahle, 24, was a fighter during the past four years, leading to him being by many considerations of the word, a survivor.

In 2017, Brandon suffered what’s commonly known as a “widow maker” heart attack — a result of a blockage in the left anterior descending (LAD) artery, which supplies blood to the larger part of the heart.

According to the American Heart Association, the survival rate after a widow maker heart attack is just 12% when it occurs outside of the hospital.

Brandon underwent open-heart surgery and spent months in the hospital.

“I got a greater appreciation for life and life just became that much sweeter to me,” he said.

Hiking and spending time outdoors has always been a part of Brandon’s life. He grew up near Yellow Springs. In his adult years, nature would be a form of therapy for him — often hiking alone.

In December, 2020, Brandon said he had a tough week at work, so he bought a ticket and flew to Jackson Hole, Wyoming to hike the Grand Teton Mountains.

“Just absolutely breathtaking,” he said as he scrolled through photos on his phone, including one he took of himself on self-timer, “I don’t usually include myself in my hiking photos.” Shortly after taking the photo, he reached Disappointment Peak, the end goal of his hike that day. With a temperature of -2 degrees and a wind chill of -22 degrees, Brandon decided to take what he thought was a shorter path back down. 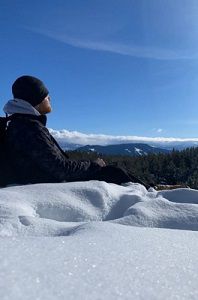 “A mile down the path, my trail just starts to end,” Brandon said. “I’m not able to see where I’m going. I’m not able to find anything that looks like a trail or whatsoever.”

His cellphone had frozen; there was no way to call for help.

During the next eight hours, Brandon fought for his life.

He trekked waist-high snow for hours, eventually coming across Jenny Lake. Brandon decided to cut across the lake, he had walked over ice earlier and it had held up just fine, but this time Brandon fell through.

He pulled himself up out of the water, his body filled with exhaustion.

“But at this point is when I really started thinking, ‘I’m going to die here. This is where my story ends,’” he said.

He kept walking, and then crawling as his legs went numb.

“I can’t put that feeling into words,” he said. “I mean, the intense pain is what happened first. That’s when I was extremely scared because I was thinking I could possibly even lose my legs.”

Brandon said his faith is what kept him going. 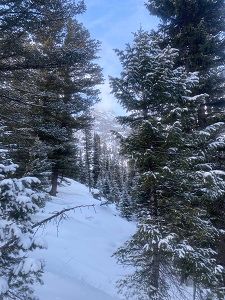 Brandon would eventually reach the parking lot where he had parked his rental car. He would begin his months-long recovery.

“I obviously knew that I was at least going to live at this point,” he said.

Five surgeries would save his legs and feet. He did lose part of a toe to frost bite.

Despite it all, Brandon remains positive, bringing the nightmarish experience into the light. He even plans to return to Jackson Hole, next time in the spring or summer.

“I want to walk those paths and just once again take in the breathtaking beauty,” he said. “Make it a positive thing.”

Brandon said he hopes to use his near-death experiences to inspire others.

“I’m going to be honest with you,” he said. “When I was on this hike, there were times when I was so cold and freezing, that I thought about just sitting under the nearest tree, falling asleep and letting myself die, because my body was so tired, but I continued to push through because I knew there was a lot for me left in my life.”

He said no matter what obstacle a person facing, to just keep going.

“This experience has just made me want to keep on seeing beautiful things in the world and just enjoy life as much as possible,” he said. “Because I have had pretty much two extra chances at it.”

Over past 4 weeks, Ohio sees 37% decrease in number of COVID-19 cases

OTA is hopeful all Ohio Townships will receive financial…

The Newark Daily Times
Prev Next 1 of 162